High-Security Registration Plate is a standard in license plate which was started on May 1, 2012, after the Supreme Court had made it mandatory for vehicle owners. This number plate will form a uniform pattern of displaying your vehicle’s registration number throughout the country.

The HSRP plates are made of aluminium, with unique details other than the registration number itself. Featuring a unique seven-digit laser code, a chakra hologram to prevent counterfeiting, a self-destructive sticker with the engine and chassis number of your car. “IND” inscribed in the colour blue. India will be inscribed at a 45-degree angle in hot stamping foil across all letters and numbers on the plate. The HSRP plates also feature a non-removable snap-on lock and if in any case somehow removed then also it will remain non-reusable.

How is it different from the old number plates?

The old number plates are very easy to tamper with and hence leads to increasing car thefts.Therefore, the uniform styled HSRP plates will serve that purpose well. HSRPs are tamper-proof, serving as a deterrent to car thieves.

HSRPs aid in creating a national data of all the motor vehicles as currently all the data is managed by hand, which is actually a very primitive way to manage and keep the record of all the cars, motorcycles and trucks in the country. HSRPs will be mandatory even if you reside in some remote village of the country.

All the new vehicles sold in the country comes fitted with HSRPs. The registration of new vehicles will also be applied to the rear as well as the front windshield. Whereas existing cars have been given a two-year time period.

HSRP installation takes a maximum of 5 minutes at your local RTO.

Where to find it?

The six centres allotted by the DTO are :

For the manufacturers/ suppliers of HSRP

Refer to the link for information about the standard norms: Click Here 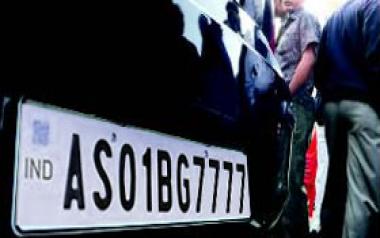